Cycling Through The Trees, a raised cycling track offers panoramic views of a Belgian forest

This cycling track in Belgium enables visitors be one with nature 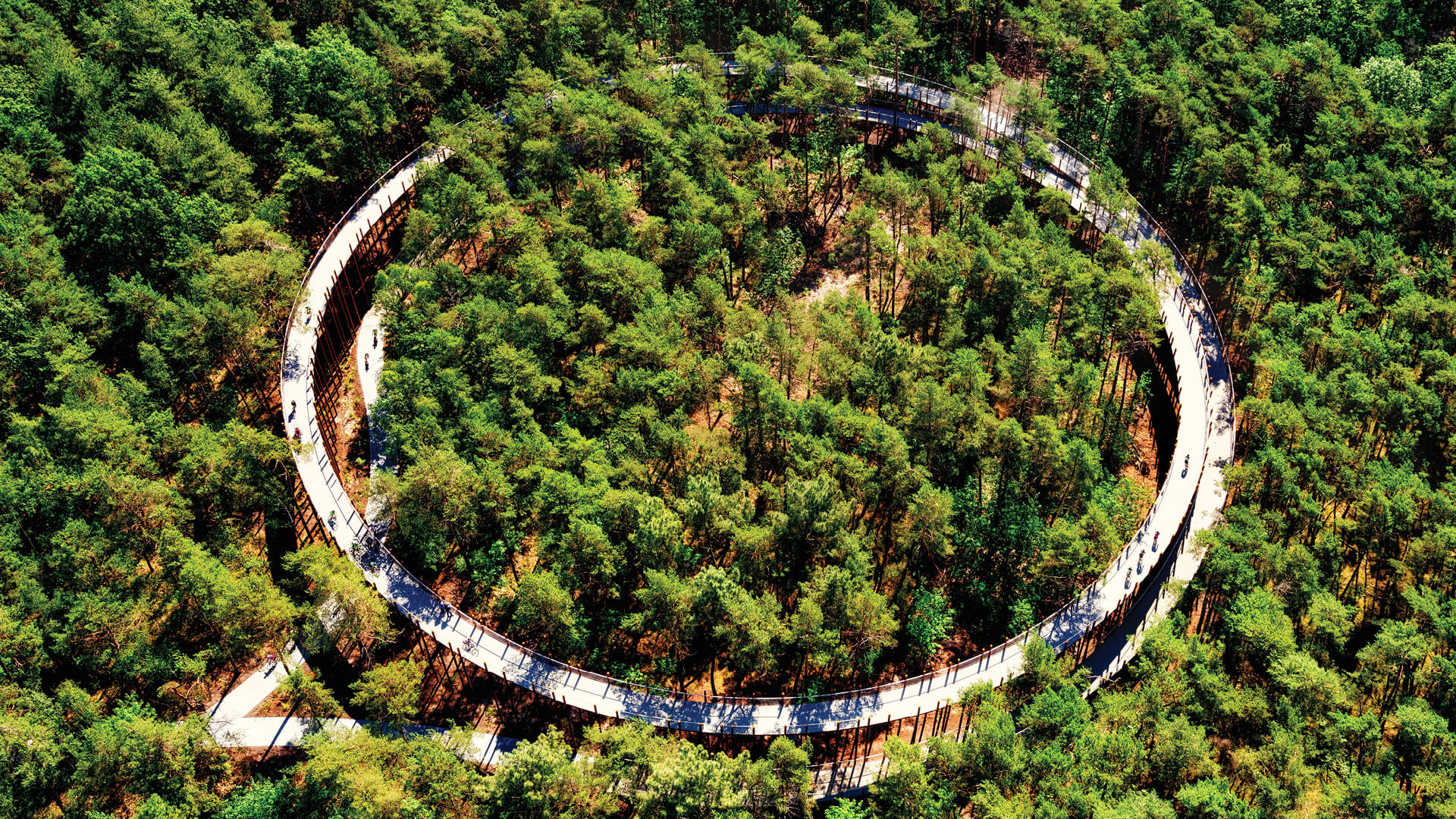 Landscape designer BuroLandschap and architect De Gregorio & Partners conceptualised a unique cycling track through the Bosland forest in Limburg, Belgium. Aptly called Cycling Through The Trees, this track is raised 10 metres above the ground. It allows visitors to cycle amid the lush green treetops of a Belgian forest. Commissioned by Visit Limburg, a tourism agency, the track includes a double circle, which is 100 metres in diameter. The track itself has a width of three metres and is approximately 700 metres long. Cycling Through The Trees slowly rises to a height of 10 metres, before sloping back down to the forest floor.

“The most important thing for us was to build a structure with the lowest possible impact on the environment and the sensitive nature present. This was the starting point! The trees were of course very important. After all, cycling through the trees would no longer make sense if trees were damaged or destroyed after the construction of the structure. Something that is not easy to construct with a diameter of more than 100 metres and a height of 10 metres,” states Pieter Daenen, Founder of BuroLandschap.

To reduce the negative impact on the environment, Cycling Through The Trees was constructed using a single crane that was placed at the centre of the circular track. While the architects BuroLandschap and De Gregorio & Partners did their best to reduce the number of trees that had to be felled for the construction, the trees that were felled, were used to build a rest stop near the track. “You could say that the design is partly determined by a building principle that shows respect for the environment. So, the construction was built from one point. One giant central crane, in the middle of the circle, features all the building elements carefully assembled without damaging one tree,” adds Daenen.

Moreover, the designers wanted Cycling Through the Trees to look like a part of the forest. Thus, the attraction was built using brown weathered steel and has screw pile foundations instead of concrete, which is unusual for large-scale constructions. Also, its columns were designed to look like tree trunks. “Brown is the colour of the earth, after green this is the most common colour in nature. Brown always blends well in an environment. The poles are like tree trunks. You have to get quite close to see the construction in its surroundings. From 100 metres away you can hardly see the construction,” says Daenen.

“The nice thing about the construction is the round spiral shape. Cycling around in combination with cycling in height has something magical. It seems as if visitors are becoming children again. You often see visitors who drive around several times. Moreover, the ride of 600 metres is quite pleasant and not too hard, even if your condition is not too good,” remarks Daenen.

Since Cycling Through The Trees was constructed, there has been a rise in the number of people visiting the Bosland forest to cycle on this track. “Bosland is the largest continuous forest in Flanders, which is still known by relatively few inhabitants. Cycling Through The Trees attracts a separate audience that normally does not move quickly to this environment. These people also help advance the local economy. Additionally, governments are also enthusiastic about this and are convinced that forests can also offer economic added value. As a result, they will also support the conservation of the forests more,” concludes Daenen.