Beyond Space covered the inside of Siersema Interieur, an office-cum-showroom, with rippling fabric in blue-green colour. 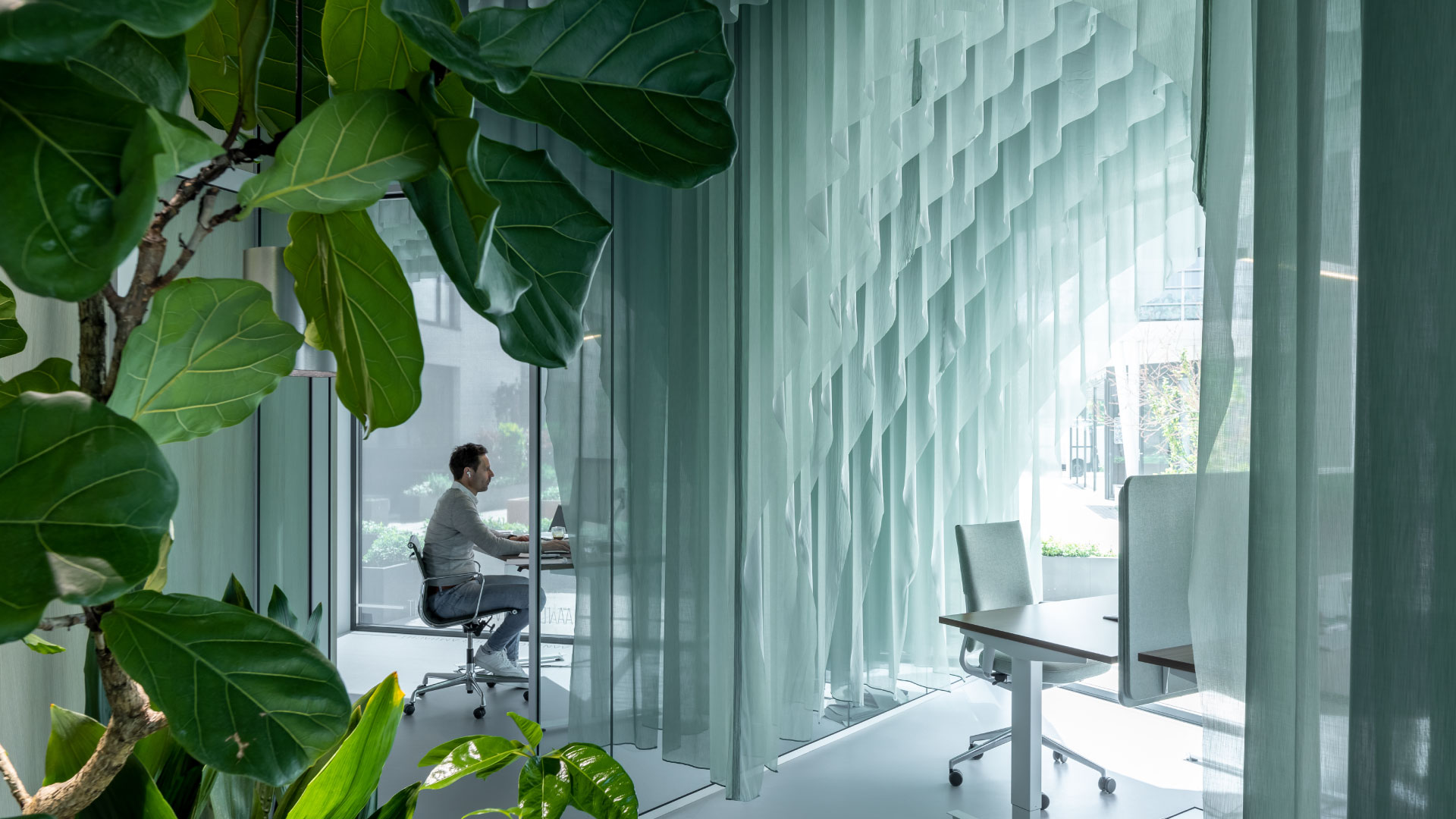 Beyond Space, a Dutch design firm, has crafted the interiors of an office-cum-showroom for upscale Dutch fabric company Siersema Interieur. The office’s design is reminiscent of Amsterdam’s IJ river, alongside which it is located. It houses a kilometre of ceiling-to-floor, semi-transparent, ocean-hued fabric that is laser cut to hew out distinctive workspaces. The fabric, which sculpts the identity of the office and retail space, is from Siersema’s collection. The design studio draped the fabric in a rippling effect, which is evocative of the movement of water as an ode to Amsterdam’s IJ river.

Beyond Space is involved in art, architecture and product development. The firm designs buildings, spaces and objects that push the boundaries of conventional design. Siersema Interieur is a specialist in luxury fabrics. In their new office, the brand’s polyester fabric has a leading role in the creation and design of the space. The bare shell of the space features high ceilings and plenty of natural light. Keeping the client’s brief in mind, Beyond Space wanted to create separate working spaces without adding walls and retaining the views of the river.

To highlight the client’s expertise, the design firm filled the entire space with fabric and then cut out the necessary areas. Since the drapes also work well acoustically, it created pleasant work spaces. Six spaces were carved out of the multiple layers of fabric, including a series of light-filled workspaces and meeting rooms. “The client’s brief to have their company’s identity and core business reflected in our spatial design quickly gave birth to the idea to sculpt the spaces from equidistant repeating drapes of a soft, semi-transparent fabric hanging from the ceiling, but cut at different lengths to allow for a meeting area, an office area, a seating area and a common area. The design of this new space is a magical display of what the client does best,” states Esther Bentvelsen, one of the architects who worked on Siersema.

Beyond Space chose a neutral, water-like, blue-green colour for the fabric. Layers of fabric were hung vertically and draped in a rippling effect from the office’s ceiling. “As such, the fabric doesn’t distract from, but serves the anti-space hewn from it. Coupled with the drapes’ natural rippling, the colour also echoes the calm waves of the water right outside. The drapes feel intimate and separate, yet through the folds one never loses sight of the entire space and its outside environment. ​​Viewed head on, the polyester fabric lets through light and adds various layers of transparency. Viewed from the side, the spaces between the fabric allows for people to view the river outside. The hue of the drapes is light enough to avoid grabbing all the attention, but adds a subtle hue to the space, which is reminiscent of water or ice,” adds Bentvelsen.

Beyond Space created a spatial identity that translates the client’s core offering into their environment, so that it is at once an expression of their brand identity as well as a functional office space and showroom. The semi-sheer polyester drapes were laser cut to prevent fraying, and chord-weighted to guarantee just the right folds. “Although the idea arrived quickly, its execution posed many challenges. What we had in mind was for someone to experience the intimacy of a bubble, but still retain the experience of the whole space, respecting sight lines through and through. We played around with different shapes and transitions, domes, bubbles, corridors, cubicles… The biggest challenge we stared down was to get the distance between the drapes just right, something we tackled by making well over fifty 3D renders,” remark ​​Beyond Space founders, Remi Versteeg and Stijn de Weerd.

At the heart of the Siersema office is a common area, which features a kitchen island, modern pendant lighting fixtures and potted plants. “The kitchen and storage are located in the middle since people spent less time there during the day. In the evening, things turn around, and the kitchen transforms into the cosiest place of the office,” add the founders. The separate spaces are connected by openings and archways and the fabric is short in the communal zones and longer in the private workstations.