Mind Manifestation’s office is inspired by the surrounding natural landscape

Studio by the Hill, the self-designed studio by Mind Manifestation, is designed keeping in mind Pune’s hot weather. 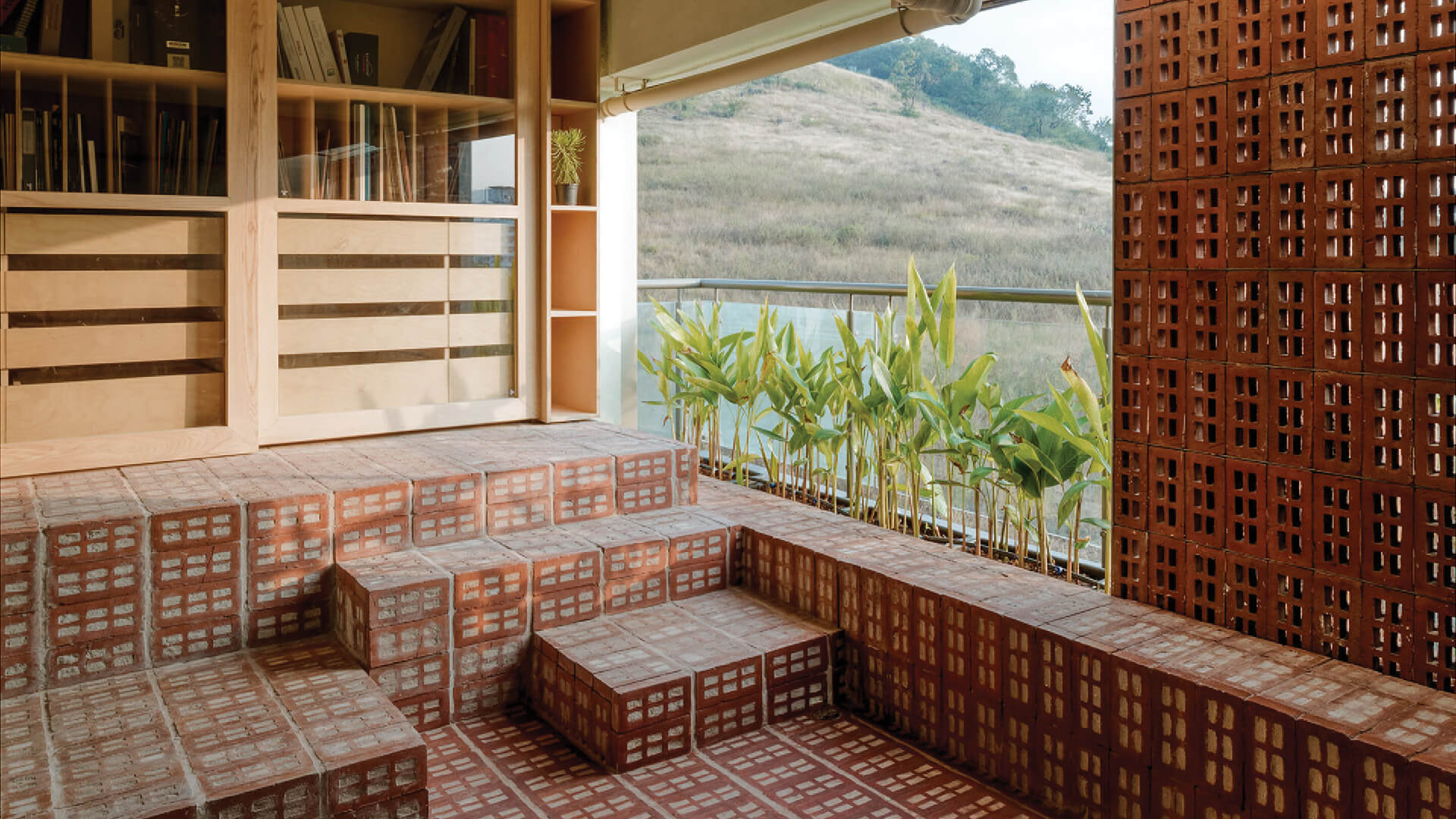 At first look, this office looks like a cafe or a restaurant. When you look closely, you realise that it’s actually an office space. Located in Pune, India, Mind Manifestation Design has transformed a 120 sqm apartment situated on a hillside into their studio. Covered in perforated bricks, the studio is a distinctive space that is informed by Pune’s tropical climate and the greenery of the neighbouring hillside. Mind Manifestation is an interior design and architecture studio that works on projects with a focus on merging vernacular construction techniques with modern design aesthetics. Their studio, aptly known as the Studio by the Hill, is a celebration of the stunning hillside it is situated on. Furthermore, it has been designed to be compatible with Pune’s hot summers. Perforated brick panels and curvilinear components help in bringing abundant natural light and keeping the office cool, while also adding to the office’s uniqueness.

“The Studio by the Hill has been meticulously created to make way for the neighbouring hill’s natural beauty. The colours and material palette was delicately chosen to complement it. This way, nature pours within and merges with the interiors. Also, most of the rooms face east, ensuring that all areas are properly lit with natural light, and preventing excessive glare and heat during the working hours. Hence, the design creates an open, fluid space with earthy hues and eco-friendly materials that complement the changing seasons of the surrounding terrain,” remarks Chetan Lahoti, Principal Partner of Mind Manifestation Design.

The Studio by the Hill features minimal glass partitions designating its many functions. The office’s fluidity is further enhanced by the addition of modest curved components to the corners. A spine runs through the entire space, dividing it into two parts. One has a waiting lobby, open workstations, a pantry, and washrooms, while the other has a conference room, a few recreational spaces, and a cabin. Both eventually lead to a multipurpose space designed in such a way that it can be transformed into any room, formal or informal, depending on the user’s needs.

At Studio by the Hill, guests are welcomed by a striking reception and waiting area, which sets the tone for the rest of the office. The reception desk and the floor are lined with perforated bricks. The waiting area features a one-of-a-kind bench, which is made of recycled cardboard tubes and curves around one corner of the space. Behind the reception, is a tiny terrace that is also covered with perforated bricks, creating a harmonious look that seamlessly connects with the outdoors. “With the waiting area, our main aim was to play with the material palette, while also challenging the idea of what a formal waiting area in an office should look like. The curved partition makes the space more friendly while also distinguishing it from the open workstations. The barrier is constructed of cardboard tubes, while the seating is made of ashwood and the coffee table is made of metal that has been textured and painted for aesthetic purposes,” adds Lahoti.

There’s also a window nook, which provides views of the adjoining hillside. To one side of the office is a minimal conference room housing a wooden conference table, which has the same cardboard tubes as the waiting area as its base. Near the window, there is a concrete ledge where employees can sit and look outside. “When it comes to our signature style, certain elements have been designed to reflect it, such as the pillar in the open workspace, which has a distinctive Maharashtrian Vada feature, and the shelf in the conference room, which is again inspired by Vada architecture. They demonstrate our style of designing vernacular elements in combination with modern spaces,” mentions Lahoti.

Moreover, the Studio by the Hill by Mind Manifestation is also a good instance of environmentally sustainable design. “The use of recycled cardboard tubes is explored in various interventions such as sliding, operable shutters, seating backrests, or open shelves supported with customised detailing. Additionally, we sought to construct openings on the southern side of the office as a sustainable approach. It provides adequate natural light to the office, thus reducing the consumption of artificial lighting,” concludes Lahoti.