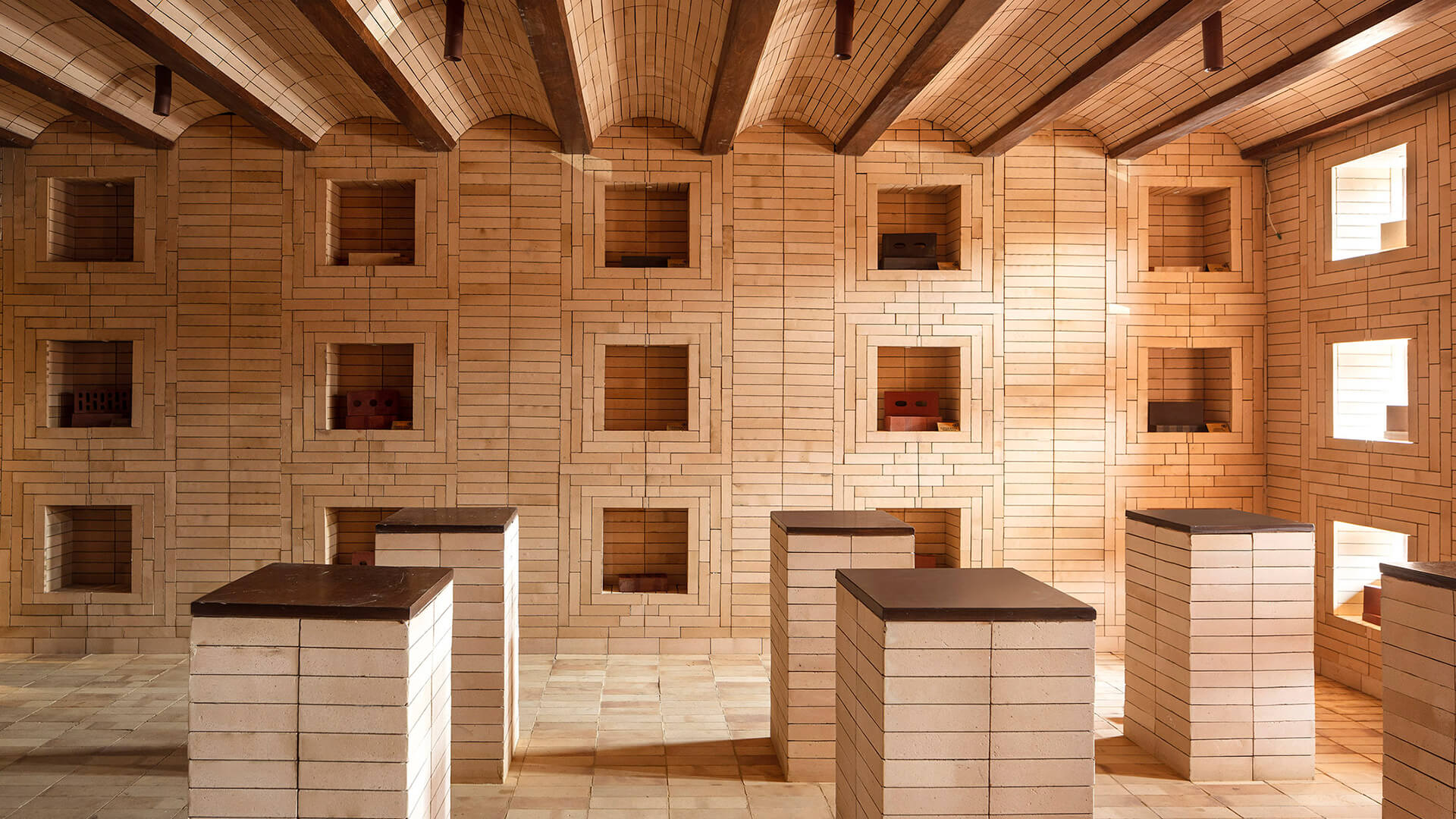 Titled The Brick Bond, this 550-square-feet store has been designed by Renesa Architecture Design Interiors Studio for Jindal Mechno Bricks, a brand that sells modular bricks. The goal of the architects was to conceptualise an immersive space that pays homage to the very material that it is made of—bricks. Showcasing the birth of bricks from their clay forms, the interiors of this experiential centre is a contemporary dive into the chambers of a classic brick kiln. The earthy colour scheme and symmetrical patterns enable the bricks to take centre stage in the store. The design of the space is a celebration of Jindal Mechno Bricks’ 50-year-old legacy and the versatility and adaptability of their products.

“At Renesa, our design approach dabbles in the exploration of extremes, giving each brief our all with no room for middle ground. This often manifests as either suave design languages embedded in minimalism or taking on an expressive demeanour to allow material-based homogeneity to come through. For us as a studio, design needs to eventually hold up a mirror to the ethos, function, and persona of the space in question. With The Brick Bond, our endeavours focused on creating an experiential space within which the humblest, yet most fundamental unit of construction became the protagonist. The brick varieties don a range of hues dabbling in deep browns, umber tones, warm yellows, and the celebrated terracotta, which can be produced in a range of modular sizes. In keeping with this, we have woven the design narrative in which a singular material forms the distilled essence of the space,” states Sanchit Arora, Principal Architect, Renesa Architecture Design Interiors Studio

Located in the centre of the construction material nucleus of New Delhi, this unique retail store showcases a new design identity for the brand. The new identity starts with the arresting façade of the store, that serves as an introduction and sets the tone for what to expect. The uniformly punctured façade, made of bricks, greets visitors to a distinctive retail space where bricks play the dual function of showcasing and being showcased. ​​The bricks used across the space, including the façade, are creations of Jindal Mechno Bricks. The architects have utilised them in a symmetrical, geometric matrix of sorts, exhibiting their diverse range of surface hues and profiles.

“The façade plays a pivotal role especially in projects of the retail genre. The site’s location witnesses a large footfall in an integral building material retail destination in New Delhi. The elevation at hand was a south-facing one and drew in a generous amount of sunlight. We utilised the terracotta-hued variety of the bricks to create a geometric façade, culling out square-form fenestrations that drew in the sun as dramatic strobes of light. Adhering to Renesa’s classic philosophy of celebrating a material in its untainted form, we were able to create an engaging façade that drew the spectator’s attention while beckoning them inside,” adds Arora.

The Brick Bond features a main display area along with an office, a bathroom, and a pantry section. The façade, interior walls, floors, and ceiling depict three unique brick bond typologies that depict the versatility of the construction material. The display section that is inspired by a brick kiln, is the focus of the space. Numerous symmetric, brick-clad pedestals rise from the floor, showing Jindal Mechno Bricks’ diverse bricks, making it look almost like an art gallery.

“Undisputedly, the core display section in the blueprint was the most challenging yet exciting space to design, as it rules the nucleus of the layout, anchoring the most crucial function. The design concept here took a metaphorical journey—we envisioned this focal space as the inside of a brick kiln of sorts. Intriguingly, bricks are fired and prepared in a kiln constituted of other bricks, a process that is helmed by a regenerative aspect. We wanted to extrapolate that vision and bathe the curvilinear ceiling, walls, floors, and display pedestals uninterruptedly,” concludes Arora.