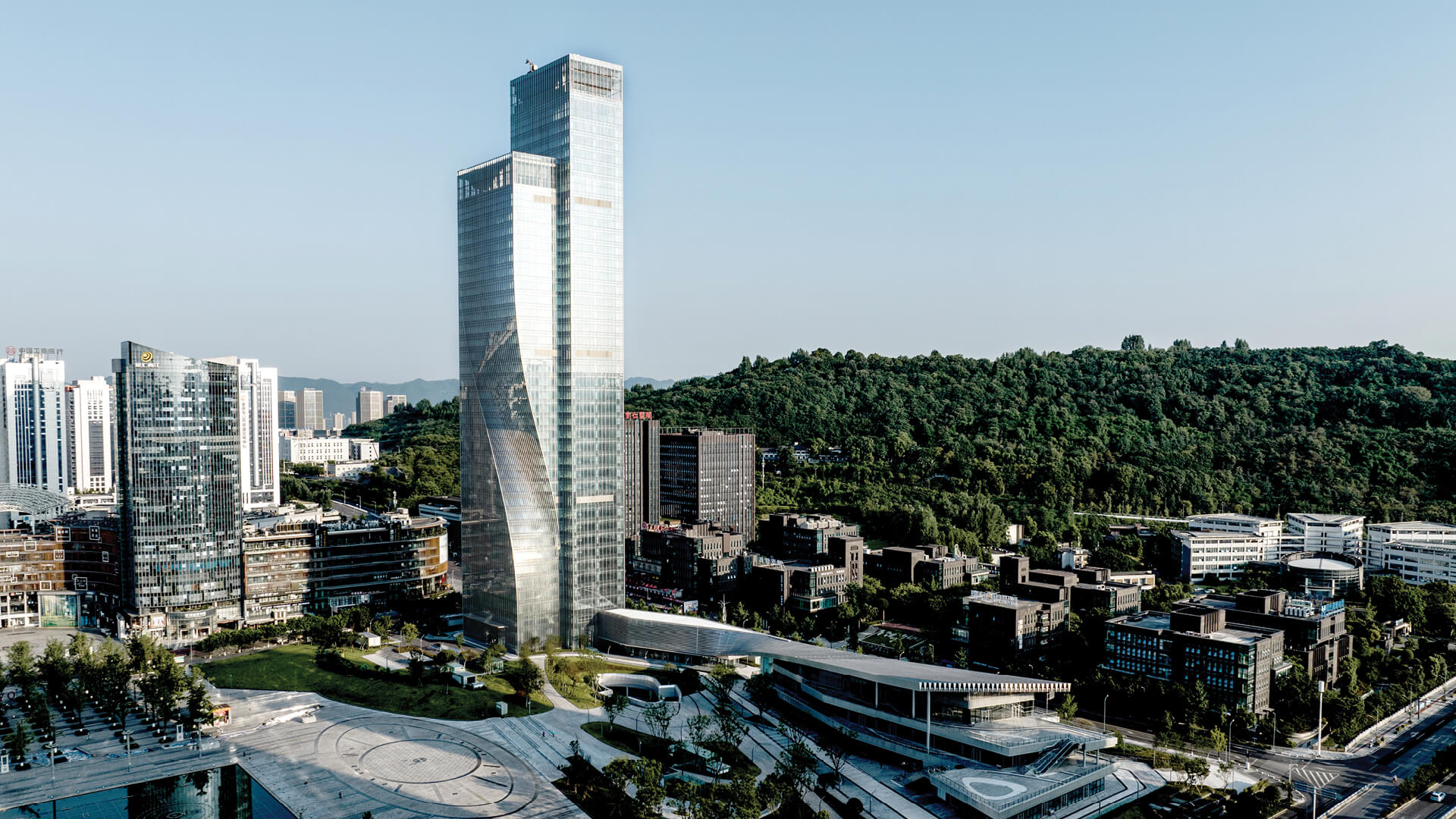 Aedas is an architecture and design firm that offers solutions with deep social and cultural understanding of the communities they operate in. Their goal is to push the boundaries of architecture and design while also responding to the practical needs of their clients. While designing the Dance of Light tower, the firm’s goal was to construct a landmark building. “Based on available published information, and with particular reference to average floor rotation, the Chongqing Gaoke Group’s Dance of Light holds the lead as the one of the most, if not the most twisted tower in the world. The façade system is parametrically designed to adapt to the changing parameters and dimensions of the geometry while fulfilling safety, waterproof and thermal performance requirements,” says Aedas global design principal, Ken Wai.

Evocative of the undulating forms of the northern lights, the twist of the stunning Dance of Light tower follows one of the forms of the curving aurora borealis. This unique tower’s spatial identity also pays homage to the technological advancements of the city of Chongqing, which is the biggest producer of automobiles in China. The skyscraper is a sort of reminder to the people of the city that they are at the forefront of industrial progress in the world. “The concept of the Dance of Light was proposed to celebrate the achievement to embrace technology by the city of Chongqing. It is derived from the mesmerising phenomenon of northern lights that light up the sky. They are natural, dynamic and elegant, all the important aspects we would like to achieve in our tower design,” remarks Wai.

Aedas partnered with façade expert RFR to create a smooth twist rather than an angular shape, which is visible on other twisted skyscrapers around the world. To achieve this distinctive twist, the building’s façade was crafted using double-curved, cold-form glass. The skyscraper architecture  uses twisted curved glass, leading each glass to be different in size and degree of twist. “The tower features a twisting angle of up to 8.8 degrees per floor, which is approximately 1.5 times more than any other skyscraper, making it one of the most twisted towers in the world. To pursue the concept of the Dance of Light, we set our goal to utilise light to define architecture. This was a huge challenge, and through the creation of two distinctive twists, a curvaceous form was generated that allows natural light to follow the contour of the building to give character and a special signature. By integrating two opposing twists at each end of the building, it will present an ever-changing façade to the urban context,” adds Wai.

​​The breathtaking tower’s façade comprises curved, silver-coloured vertical mullions, which reflect light off the building, making it look different from different angles and at different hours of the day. For example, when the sun rises, the skyscraper reflects light in the curved form of the northern lights, when night falls, the curved façade showcases reflections that allude to the dancing figure of a ballerina. “By using strong vertical lines in the shape of semi-circular external mullions, natural light will be able to follow the contour of the building. The mullions are painted in bright silver PVF2 finish and through contrasting light conditions, the reflection and refraction of the facade express the unique concept of the dance of light,” states Wai.

“The façade is not only an outlook expression, but also a way of protection that sculpts interior spaces. As for the master layout, we have put thorough consideration to the surrounding environment and the building volume. The tower is located on the left side of the mall, minimising the towering effect on the adjacent parts of the development, and establishing interactive connections in between. The tower sets back northwards, to connect the podium and the mall at the south. A variety of public spaces for civic leisure has thus been created. The underpass to its west leads easy access to the existing shopping centre, as a sensible approach to improve commercial value of underground space,” concludes Aedas global design principle.